She is beautiful ! It is quiet, it is an old Europe, it is accessible to the other capitals and is an excellent base for a star trip in Slovakia and it is called Bratislava! In this article we will present tips for a trip to Bratislava, the capital of Slovakia, good and cheap hotels in Bratislava through booking and other important tips before a trip to the enchanting city which is only about an hour drive from Vienna Austria

It is recommended to take austrian flights to Vienna (airfare with a suitcase and a guest, a very high standard flight costs about 1000 NIS depending on the season) and from there you can rent a car from Vienna Airport and drive an hour or so to the delightful Bratislava. The last one can be done in Vienna or travel an hour or so from a hotel in Bratislava, and it is a pity to waste precious time on a flight to Hungary and from there on the train, the time of the tourist is expensive and the goal is not Search flights to Bratislava See at the end of the page Search box Cheap flights to Bratislava Enter your dates to get the best deals for flights to Slovakia and any destination in the worldsavings,

Slovakia is a very proud country in its renewed culture and independence after the end of the Soviet regime and the disengagement from the Czech Republic. On the other hand, Slovakian culture is a fabric of Hungarian influences (mainly food), influences from the Czech side and from neighboring Austria, similar to the countries that once formed the Austro-Hungarian Empire

Image courtesy of domdeen at FreeDigitalPhotos.net

The city offers entertainment between Europe and sleep, and several places of entertainment and shopping in Bratislava, which have been built in recent years in which Slovakia has become a preferred destination for factories throughout Western Europe and the average wage. Therefore it is recommended to travel as soon as possible in order to earn the city in years when tourism in Bratislava is cheap compared to other cities in Europe. In this article we will tell about 5 main attractions and the rest you will find in a more extensive article that includes Bratislava recommendations with a trip to Bratislava

The city of Nitra is an hour's drive from the capital of Bratislava and it is a visit to a city that once concentrated the local paprika industry and the time's capitulation replaced the paprika in the mall but remained with a central street paved with medieval style and classical European sights. There is an agricultural university in the center of the city and a huge castle worth the trip and in any case more impressive than the castle of Bratislava, and the readers who may disagree with me will be forgiven.

If you rented a car for this day trip and you have enough time, you can proceed with the vehicle for another half hour to the expanses of golden Moravia and taste this historic land. If you arrived in Moravia on harvest days, set the evening trip and you could see a spectacular view of fields that were harvested and at night look like golden surfaces. It shows that you do not forget and is allowed an extraordinary experience from this country terrorist

A trip to Slovakia is a free route in the city of Trnava, Slovakia, which provides a glimpse of rare Italian architecture in the heart of the Austro-Hungarian Empire. Travel time from Bratislava to the capital is about an hour including necessary stops on the way to view the countryside and you can drive through roads E571 / E58 / E75. The synagogue (what remains of it) is part of the Jewish heritage track in Slovakia 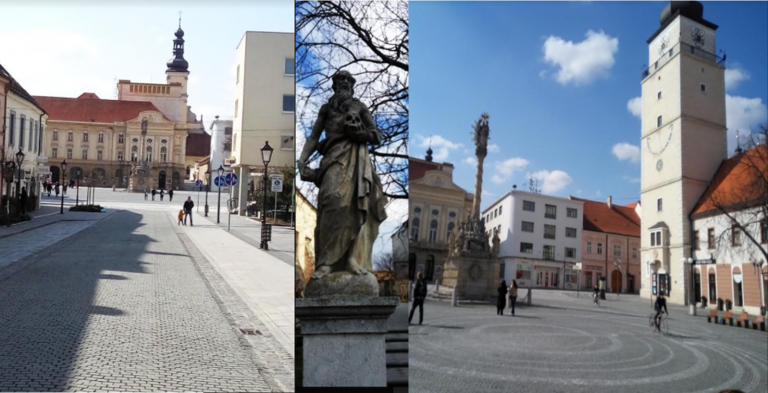 Treanbe Slovakia A tour of an Italian-style town and hypnotic churches, statues and squares

This is a very quality hotel in the city center of Bratislava, excellent prices, wonderful service, very courteous staff and the possibility of parking a rented car in the city (check previous price). A generous, local breakfast is served daily and the rooms are clean and bright! There is also a café and a small bar, thanks to proximity to any place in the city, suitable for a trip with children in Slovakia.

The hotel has gained a good opinion from visitors of the booking site located in the city center of Bratislava and can be a great base for exploring the city and outside.